Eleven days in Israel with theologian/rector David Pileggi from Christ Church Jerusalem as our tour guide, our heads are certainly filled with new information and insights about the scriptures! I will save those academic thoughts for another time but wanted to share these delightful and unexpected observations. Spiritual formation is often shaped by our wanderings when we notice those simple things around us. Here are some of my observations…

Shabbat. Sabbath. Taking a break. Resting your body, releasing your responsibilities, giving others time off from work. In Hebrew, Shabbat is the word for Sabbath, and they take it very seriously in Israel, even those who are not particularly religious or pious. Shabbat begins at sundown Friday evening until the appearance of the first three stars on Saturday evening. Good wine and sweet bread are important parts of the Friday evening Shabbat meal. Blessings are given. Family. Tradition. Relationships. Cultural rhythms create stability.

Stores close. Preparations the day before were made to prevent working on Shabbat (including cooking although I heard cleaning up is often relegated to the men). Shabbat elevators automatically keep running by being set in motion before Shabbat starts. They are programmed to stop/open/close at each floor, so no one must push buttons to make them work. Even hand dryers in the bathroom have a sign saying not to use them on Shabbat. The world pauses to remember the goodness of our God and our covenant as a faithful people.

Rest. Play. Conversation. Exercise (I guess so long as it doesn’t feel like work). Since almost everything is closed during Shabbat, we took a long walk through nearby parks. It was a wonderful sight. Children and families playing, walking, dancing, chatting; groups of friends sitting around and telling stories; it was almost surreal. We were told the story of a young girl who was given permission to watch television for one hour on Shabbat. She commented, “I usually only watch about five minutes because I want to go out and play with my family.” Wow. 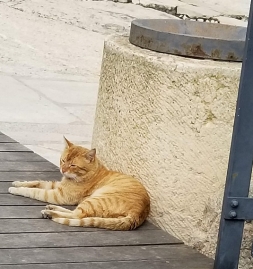 At least in the urban areas, dogs have owners and cats have territories. We only noticed one stray dog during our trip (plenty playing at the dog park under the watchful eye of their owners) while cats seemed to be spread fairly evenly across the land. I don’t remember these semi-feral cats ever being in pairs or with kittens. They seemed to have a solitary role in the fabric of Israeli society, like “Cats, we feed you scraps, we don’t harass you, we make sure you are fed but not overfed, so you take care of us by keeping the rodent population under control. Deal? Deal.”

In the ancient city of Jerusalem, with literally millions of good hiding places for disease-spreading rodents, we never even got a glimpse of one rat or mouse darting across the many streets or passageways. The feline forces were often curled up while on duty but seemed to have their own posts to guard. All God’s creatures got a place in the choir (except rodents) and Israeli cats seemed to be quite happy with their role in the pageant.

3) Children are the same everywhere. 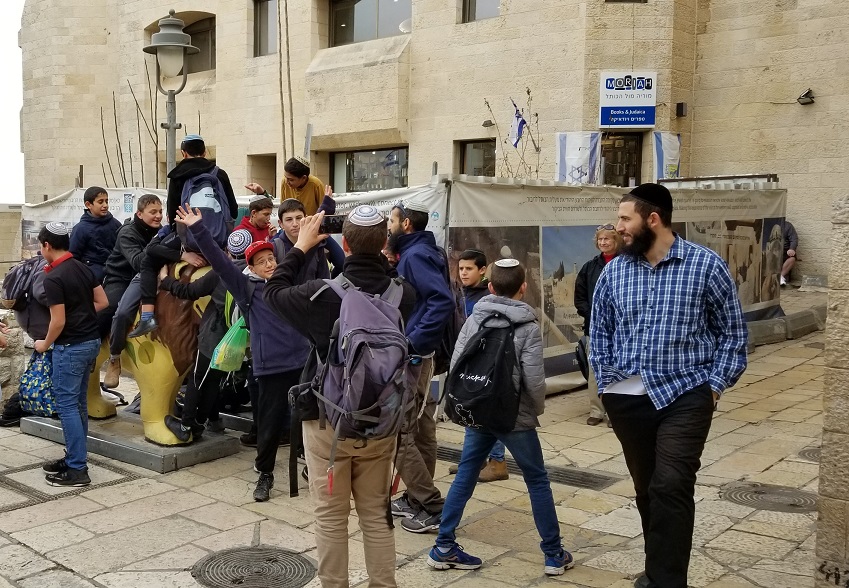 Children laugh, chase, fall down, cry, slowly get up, hug, and start the cycle all over again, especially when other children are near. They bolt towards their parents when startled. Children misbehave. Parents respond and get embarrassed. Yet, with few exceptions, parents deeply love their children, and are often exhausted with all the matters of parenting. People are people are people although our brokenness and sin has not only separated us from God, but from those with whom we share humanity. We all feel the same range of emotions. But we all get some things right and other things wrong, and each life matters.

Regardless if one is a Jew, Christian, Muslim, Druze, Agnostic or Atheists; Liberal, Reformed, Conservative, Hasidic; from every tribe, nation, and language on earth, all people, every family looks remarkably the same in terms of the stresses of daily life. Again, and again, I was reminded of our common experience of humanity, whether in the airport, hotel, restaurant, grocery store, park, or just pushing a stroller down the street with another child in tow.

Cultures, religions, and societies certainly differ, but at the core of our faith is a love for others, even with those we differ including our perceived enemies as Jesus commands us. We need this simple recognition of our common experience. Others love their children just as we love our children. They grieve when a child is sick or dies, just as we do. They have dreams and hopes just as we do. Realizing this commonality is a small start towards a more just world.

Jesus taught, “You have heard the law that says, ‘Love your neighbor’ and hate your enemy. But I say, love your enemies! Pray for those who persecute you! In that way, you will be acting as true children of your Father in heaven. For he gives his sunlight to both the evil and the good, and he sends rain on the just and the unjust alike.” Matthew 5:43-45

4) Kibbutzim (plural of Kibbutz) have adapted.

A Kibbutz is a uniquely Israeli/Jewish model for collective settlement and safety. The Kibbutz is an intentional community, often connected with agriculture but not always. They collectively produce work/income for the members. We stayed in a very nice conference center on the southern edge of Lake Tiberias (Sea of Galilee) owned by a Kibbutz. One of the leaders of the Kibbutz provided a tour. The compound was very nice with housing, a grocery store, schools, collective laundry, and sheltered areas for times of war or rocket attacks. The community had about 150 voting members and over 300 people including children.

In 1948, when Israel was being re-established, many of the new citizens were coming from the Russia and other countries where collectivism and socialism was standard. The Jewish people have a long history of clustering together throughout diaspora – being scattered among other countries as refugees. The Kibbutz was a natural way to survive and ultimately, thrive. Everyone shared equally in the work and benefits of the community. Major decisions are made by vote.

I first learned about the Kibbutz concept as a teenager and found myself fascinated by the concept of shared possessions and tasks. After I became a follower of Jesus, several of us took a deep dive into what it means to be part of a “Christian Community” where we share assets and a common mission. Koinonia as experienced by the early church in Acts. This was the first time I saw a Kibbutz “up close and personal”.

What struck me about this experience? Kibbutzim in the first generation (at least this one) were strictly “all things in common” while over the following generations, they gravitated towards individual ownership as younger generations became less committed to the common identity. This reflects a worldwide shift towards individualism, capitalism, materialism, and placing the individual above the community. These “isms” often have a dark side: selfishness, greed, pride, and decreasing concern for the needs of others. What do we have the right to decide for ourselves verses what is ultimately decided by a higher authority? Orthodoxy is yielding to the biblical and traditional authority. Comfort seems to be the soil in which egocentrism grows.

Being part of a community (primarily the church) helps keep our individualism in check. “Let us hold fast the confession of our hope without wavering, for he who promised is faithful. And let us consider how to stir up one another to love and good works, not neglecting to meet together, as is the habit of some, but encouraging one another, and all the more as you see the Day drawing near.” Hebrews 10:23-25

Rev. David Pileggi, our erudite tour guide, asks the question, “Why do you think God gave this barren, strip of land full of rugged wilderness—through which major armies of other countries would march, pillage, and destroy over thousands of years—to a people he calls His Chosen?”

Several of us knew part of the answer, “Being at this crossroads of the ancient world allowed for the spread of the gospel.”

“What else?” David asked.

The answer didn’t come to my mind although others may have known.

David paused and said, “The barrenness and vulnerability of the land required God’s people to depend on him.”

The rough spots, those things that we don’t want to do, the fear and uncertainty of life, the threats and enemies of God, all serve a purpose. The Jewish people are our exemplars. They remind us that we are never alone. Come what may, God is with us.

We stand on the shoulders of a brave, resilient, and faithful people who carry ancient traditions into many cultures, in many place, over thousands of years. Through Jesus, we are grafted on to their blessing, and a blessing to be a blessing. This only comes by living and going into rough places. As Isaiah the prophet proclaimed and John the baptizer quoted, “A voice cries: “In the wilderness prepare the way of the Lord; make straight in the desert a highway for our God.” Isaiah 40:3.

We too smooth out the rough spots to prepare a way for the Lord.

“Beware lest you say in your heart, ‘My power and the might of my hand have gotten me this wealth.’ You shall remember the Lord your God, for it is he who gives you power to get wealth, that he may confirm his covenant that he swore to your fathers, as it is this day.” Deuteronomy 8:17-18

Note: I have five more observations from our trip but wanted to ponder them some more first. On our trip, we learned a ton about biblical history and archaeology. So far, we’ve even dodged the COVID-19 virus! Israel is the heartbeat of three major religions of the world. As a followers of Jesus, our lives were changed by this experience as we saw history right before our eyes. I hope you too have the opportunity to visit the Holy Land. Shalom.

REA Leadership Resources, Anglican Priest, author of "Deaf Diaspora: The Third Wave of Deaf Ministry" and "DEAFCHURCH 21: Vision for a New Generation". Bob and Kathy Ayres are the founders of "Deaf Teen Quest", a national ministry model of Youth For Christ USA. View all posts by R.E. Ayres Perspectives